This article was last updated by Digital Trends contributor Kristen Hall-Geisler on March 30, 2020.

You’ve got gear to haul, large items to buy, and pets that need shuttling to play dates. No car will do for you, you need an SUV. The best crossover you can buy is the Nissan Rogue. It didn’t become Nissan’s best-selling model — and one of America’s best-sellers — by accident. When we drove it, we praised its bang-for-the-buck proposition, its comfortable and spacious interior, and the decent amount of performance it offers.

Standing out in this crowded segment of the market is easier said than done. If the Rogue doesn’t win you over, there are other great options on the market. Digital Trends has driven them all; we published nearly 90 car reviews in 2018. By drawing on this vast experience, we’ve selected the best luxury crossover and the best high-performance crossover, among other options.

Why should you buy this: It’s all the crossover you need.

Who’s it for? Anyone with gear or people to carry.

Why we picked the Nissan Rogue:

The Nissan Rogue is exactly what a car-derived crossover should be. It’s reasonably big so it can carry five adults and their gear with ease, and it offers a relatively generous amount of ground clearance so it’s not afraid of light off-roading.

And yet, it’s more efficient than its footprint suggests. It’s powered by a 2.5-liter four-cylinder engine rated at 170 horsepower and 175 pound-feet of torque. Front-wheel drive comes standard, and helps the Rogue return 29 mpg in a combined cycle, while all-wheel drive is offered at an extra cost. These figures are impressive considering the Rogue’s size and weight, and they illustrate what often makes crossovers more attractive than traditional SUVs. However, the hybrid version of the Rogue has been discontinued for 2020.

Why should you buy this: It’s a big vehicle that doesn’t feel big.

Who’s it for: Large families.

Why we picked the Subaru Ascent:

The Ascent was designed primarily to keep Subaru owners who needed bigger vehicles from defecting to other brands, but it’s a solid choice even if your current ride isn’t a Forester or an    Outback. In addition to plenty of space (including a headline-grabbing 19 cupholders), the seven- or eight-seat Ascent boasts a solid array of tech features and impressive driving dynamics.

Available tech features include built-in Wi-Fi that can support up to eight devices, and a rearview mirror that displays streaming video. Similar to versions offered on certain General Motors and Nissan vehicles, it displays a feed from a rear-mounted camera in the mirror, giving the driver a view unobstructed by rear pillars or passengers’ heads. The Ascent comes with Subaru’s EyeSight bundle of driver-assist features, which includes adaptive cruise control, autonomous emergency braking, and lane-keep assist. A head-up display that shows safety warnings is available.

While not a sports car, the Ascent is also quite nice to drive. The 2.4-liter turbocharged boxer-four engine’s 260 hp and 277 lb-ft are more than adequate and, unlike some competitors, Subaru offers all-wheel drive as standard equipment. The Ascent handles twisty back roads like a much smaller car, and even offers a useful 5,000 pounds of towing capacity.

Why should you buy this: It’s practical, stylish, and high-tech.

Who’s it for? Those who want the nicest and easiest compact crossover.

Why we picked the Volvo XC40:

The best compact crossover is the Volvo XC40. We’ve driven the Swedish firm’s smallest soft-roader, and we walked away impressed with its human-centric, driver-friendly interior. It makes time spent traveling in the XC40 less of a chore. Clever touches like a grocery bag hook integrated into the glove box door and an in-car trash bin make a big difference when you’re on the road.

The XC40 is geared more toward comfort than sport, like nearly every Volvo to date. It’s not as much of a thrill to drive as some of its rivals, but the trade-off is a level of refinement and smoothness normally found in bigger, more expensive models. The infotainment system is displayed on a big, portrait-oriented touchscreen embedded into the dashboard. It’s intuitive to use, and it responds quickly to inputs. It’s one of our favorite systems on the market.

As a bonus, you can subscribe to the XC40 by opting into Volvo’s clever Care by Volvo program. For a flat monthly fee, you get the XC40 of your choice, insurance, maintenance, plus replacement of wear-and-tear items like tires and brake pads.

Why should you buy this: Sporty performance at a lower than average price.

Who’s it for? Those on a tight budget who don’t want to sacrifice fun or features.

Why we picked the Hyundai Kona:

The Kona looks fun to drive — and amazingly, even at a starting price around $20k, it is. The base 2.0-liter engine with 147 horsepower moves this subcompact SUV along just fine, but the turbocharged 1.6-liter with 175 horsepower is zippier. The turning radius is tight like a go-cart, and the low stance means confident cornering. No matter which engine you pick, the Kona is rated at 30 mpg combined. There’s also an all-electric version available with 258 miles of estimated range.

The Kona’s interior is nicer than you might expect at this price point. It’s well designed, and the materials don’t feel cheap. The infotainment system comes with Apple CarPlay and Android Auto, and the upgraded system includes wireless device charging. Lane keep assist and forward collision warning are standard, with more safety features, like adaptive cruise control, available with higher trims.

Why should you buy this: It’s literally the Porsche of small crossovers.

Who’s it for? Crossover shoppers who don’t want to sacrifice performance.

Why we picked the Porsche Macan Turbo:

It may not be a 911, but the smaller of Porsche’s two crossovers stands out as one of the sportiest vehicles of its type. Like the larger Cayenne, the Macan tries hard to live up to the Porsche name, but its more compact proportions make it a much more credible canyon carver.

The Turbo is positioned at the top of the Macan family, and its performance figures rival those posted by many sports cars. Power comes from a 3.6-liter V6 engine that’s twin-turbocharged to develop 434 horsepower and 406 pound-feet of torque. It takes 4.1 seconds to reach 60 mph from a stop when fitted with the optional Sport Chrono package, and it doesn’t stop accelerating until the speedometer needle indicates 167 mph. It handles remarkably well, too.

Porsche’s infotainment system is one of the best in the business because it’s sharp, intuitive, and quick. And, the materials found inside the Macan’s cabin feel like they belong in a luxury car; Porsche didn’t cut corners. The Macan Turbo isn’t cheap, but it’s your best option if you’re looking for a high-performance crossover.

Why should you buy this: It’s more car than crossover.

Who’s it for: Urbanites in need of a crossover.

Why we picked the Kia Niro PHEV:

With its small footprint, its low ride height, and a complete lack of off-road pretensions, the Kia Niro is more of an enlarged hatchback than a proper crossover. That’s a good thing, though. It means buyers don’t have to sacrifice fuel economy to get a spacious interior and a higher seating position.

Kia offers several variants of the Niro, including a battery-electric model and a hybrid. We chose the plug-in hybrid model as the best of the lot because it strikes an ideal balance between efficiency and usability. It’s powered by a gasoline-electric drivetrain made up of a 1.6-liter four-cylinder engine and a small electric motor. Together, the two power sources deliver 139 horsepower and 195 pound-feet of torque. Kia claims a 560-mile driving range, 105 mpge (miles per gallon equivalent) when running on electricity, or 46 mpg combined with both power sources running. You can drive for up to 26 miles on electricity alone if the battery pack is fully charged.

We spent time with the Niro PHEV and concluded it drives like a regular car. It looks like one, too; nothing about it screams “I’m a hybrid!” Unfortunately, front-wheel drive is the only configuration available, and Kia isn’t planning on adding all-wheel drive anytime soon.

The Digital Trends automotive team scrutinizes vehicles on the road through a comprehensive testing process. We examine the qualities of the exterior and interior and judge them based on our expertise and experience in the context of the vehicle’s category and price range. Entertainment technology is thoroughly tested, as well as most safety features that can be tested in controlled environments.

Test drivers spend extensive time behind the wheel of the vehicles, conducting real-world testing, driving them on highways, back roads, as well as off-road and race tracks when applicable.

Automakers tend to use the terms crossover and SUV interchangeably, but that isn’t really accurate. It’s mostly the fault of marketing departments: brands choose to describe their vehicles based on public sentiment more than accurate descriptions.

Calling any of the vehicles we’ve listed SUVs would be incorrect. Here’s why: crossovers are normally built on a car-like unibody architecture, meaning the body and the chassis form one part. SUVs use body-on-frame construction, meaning the body is bolted to a separate frame. The layout makes a big difference. Unibody cars are normally lighter, so they’re more efficient, more comfortable, and less truck-like to drive. Meanwhile, body-on-frame cars are more rugged, more capable, and more durable.

Now that you know the basic differences, you just need to decide how you’ll use your vehicle. Planning to do a lot of off-roading or towing? You’re looking for an SUV. Need something efficient, comfortable, and more affordable? A crossover is the right choice. With that covered, if you’ve made it to the bottom of this article and now know you need an SUV, we suggest reviewing our top SUV picks.

Fri Apr 3 , 2020
American Bicycle is the Premier Manufacturer of Bike Lockers and Bike Racks as well as a supplier of related equipment.  We offer the widest line of the Most Secure Bicycle Security solutions in the market. Our Bicycle Lockers and Bike racks are produced with a variety of options and different […] 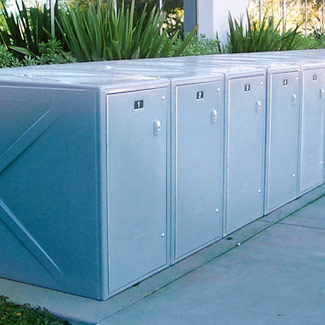