This summer, some families are trying to have it both ways. They’re heading out … and staying home, exploring public spaces while avoiding public bathrooms.

“Well, you take your home with you!” said RV enthusiast Chris Chambers.

One way of dealing with COVID-19 is to buy a recreational vehicle – an RV.

“It’s nice knowing that we can control the environment that we’re living in and not have to worry if something was sanitized or not,” said Mike Marlowe.

Outdoors, but not entirely.  “We don’t really camp; we’re not campers,” said Bill Morace outside his RV.

Sales of midrange motorhomes were up 90% in June, compared to last year, reports Kelefa Sanneh of The New Yorker magazine.

Gary Threlfall has owned Garick RV, in New Jersey, for 36 years. Lately, he’s seeing more first-time buyers, he says, because of the pandemic: “Just the fact that there’s so many people coming, calling, emailing. It’s kind of their only choice, because an RV is a socially-distanced vehicle, a socially-distanced vacation, and a way to corral or keep your family together.”

That kind of sales pitch has been around for more than a hundred years. Historian Marguerite Shaffer notes that a wealthy couple from New York City, the Conklins, bought a bus. “They re-outfitted it into this kind of double-decker mobile home, and they drove across the country from New York to San Francisco,” she said.

And sales really took off after World War II. “The middle class is expanding, and so all of a sudden, you know, everybody is on the road,” Shaffer said.

Everybody, including Lucille Ball. In the 1954 movie, “The Long, Long Trailer,” she breaks a cardinal RV rule: When towing a trailer, always ride up front.

“That’s really, I think, the quintessential moment where the RV becomes the perfect site for movie comedy,” Shaffer said, “where you’re, like, in this kind of contained space and you’re working out your domestic issues.”

On Gary Threlfall’s lot, trailers start around $15,000, but those sold out early.

It’s not all 21st century. Yes, you get your own bed, but also empty your own waste. How unpleasant a task is that? “You can empty your tanks without getting your hands dirty,” Threlfall said.

RV owner Maureen Morace said, “Our motorhome has amenities that I didn’t have in my house!” Like, 45 feet of heated floors in the winter.

Threlfall showed Sanneh one model that offered such conveniences as a washer-dryer, range, a hidden flatscreen TV, and a fireplace, along with reclining chairs.

And someone has to do the driving. Steering a motorhome that is 36 feet long and eight feet wide (about the size of a city bus) requires no special license, although first-timers may need a bit of practice. And no rearview mirror!

“Something about this vehicle does encourage caution,” Sanneh said as he got behind the wheel – and clipped a corner while making a turn. “That was my back wheel, right? Aaarrghh!!”

It’s not exactly an impulse purchase. Bill Morace said, “We were going to buy a second home in the country, in the mountains, and we decided to buy a motorhome instead, where our view could be anything we want it to be.”

This year, lots of people have been cooped up at home, and some of them are ready to move.

“They could be working and traveling and seeing different things,” Morace said, “and there’s no limitations to where you can go!”

Fri Aug 21 , 2020
Denver police are searching for three masked suspects who they believe intentionally set a Green Valley Ranch home on fire earlier this month — killing five members of a Senegalese family — before fleeing in a dark-colored, four-door sedan. Police on Tuesday evening released photos of the suspects, who wore […] 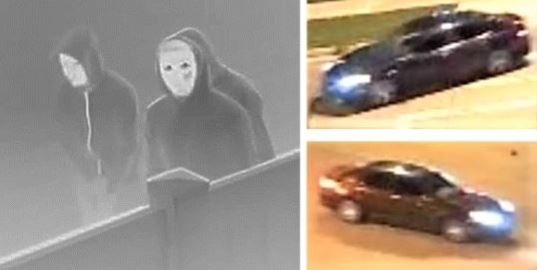