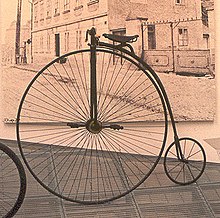 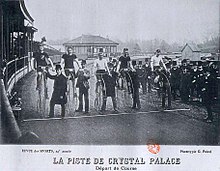 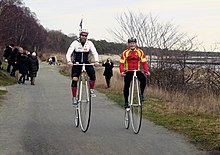 Two highwheel cyclists at a pressconference in Ystad ahead of the “Sweden 3 Days Highwheel Race” 2020.

The penny-farthing, also known as a high wheel, high wheeler and ordinary, was the first machine to be called a “bicycle”.[1] It was popular in the 1870s and 1880s, with its large front wheel providing high speeds (owing to it travelling a large distance for every rotation of the legs) and comfort (the large wheel provides greater shock absorption). It became obsolete from the late 1880s with the development of modern bicycles, which provided similar speed amplification via chain-driven gear trains and comfort through pneumatic tyres, and were marketed in comparison to penny-farthings as “safety bicycles” because of the reduced danger of falling and the reduced height to fall from.[2]

The name came from the British penny and farthing coins, the former being much larger than the latter, so that the side view resembles a larger penny leading a smaller farthing.[3] Although the name “penny-farthing” is now the most common, it was probably not used until the machines were nearly outdated; the first recorded print reference is from 1891 in Bicycling News.[4] For most of their reign, they were simply known as “bicycles”. In the late 1890s, the name “ordinary” began to be used, to distinguish them from the emerging safety bicycles;[5] this term and “hi-wheel” (and variants) are preferred by many modern enthusiasts.[6][7]

Following the popularity of the boneshaker, Eugène Meyer, a Frenchman, invented the high-wheeler bicycle design in 1869 and fashioned the wire-spoke tension wheel.[8] Around 1870 English inventor James Starley, described as the father of the bicycle industry, and others, began producing bicycles based on the French boneshaker but with front wheels of increasing size,[3] because larger front wheels, up to 5 feet (1.52 m) in diameter, enabled higher speeds on bicycles limited to direct drive.[2][3][9][10][11] In 1878, Albert Pope began manufacturing the Columbia bicycle outside Boston, starting their two-decade heyday in America.[3]

Although the trend was short-lived, the penny-farthing became a symbol of the late Victorian era. Its popularity also coincided with the birth of cycling as a sport.[3] 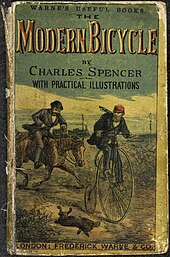 Book cover of The Modern Bicycle, published in London in 1877

Eugène Meyer of Paris, France is now regarded as the father of the high bicycle[8] by the International Cycling History Conference in place of James Starley. Meyer patented a wire-spoke tension wheel with individually adjustable spokes in 1869.[3] They were called “spider” wheels in Britain when introduced there.[3] Meyer produced a classic high bicycle design during the 1880s.

James Starley in Coventry added the tangent spokes[3] and the mounting step to his famous bicycle named “Ariel”. He is regarded as the father of the British cycling industry. Ball bearings, solid rubber tires and hollow-section steel frames became standard, reducing weight and making the ride much smoother.[3]

Penny-farthing bicycles are dangerous because of the risk of headers (taking a fall over the handlebars head-first). Makers developed “moustache” handlebars, allowing the rider’s knees to clear them,[12] “Whatton” handlebars that wrapped around behind the legs,[13] and ultimately (though too late, after development of the safety bicycle), the American “Eagle” and “Star” bicycles, whose large and small wheels were reversed.[14][15] This prevented headers but left the danger of being thrown backwards when riding uphill. Other attempts included moving the seat rearward and driving the wheel by levers or treadles, as in the “Xtraordinary” and “Facile”,[16][17] or gears, by chain as in the “Kangaroo” or at the hub, as in the “Crypto”;[14] another option was to move the seat well back, as in the “Rational”.[14][18]

Even so, bicycling remained the province of the urban well-to-do, and mainly men, until the 1890s,[19] and was a salient example of conspicuous consumption.[20]

Man standing next to a penny farthing in Fife, Scotland, 1880

The penny-farthing used a larger wheel than the velocipede, thus giving higher speeds on all but the steepest hills. In addition, the large wheel gave a smoother ride,[21] important before the invention of pneumatic tires.[22]

Although the high riding position seems daunting to some, mounting can be learned on a lower velocipede. Once the technique is mastered, a high wheeler can be mounted and dismounted easily on flat ground and some hills.[citation needed]

An attribute of the penny-farthing is that the rider sits high and nearly over the front axle. When the wheel strikes rocks and ruts, or under hard braking, the rider can be pitched forward off the bicycle head-first. Headers were relatively common and a significant, sometimes fatal, hazard. Riders coasting down hills often took their feet off the pedals and put them over the tops of the handlebars, so they would be pitched off feet-first instead of head-first.[13]

Penny-farthing bicycles often used similar materials and construction as earlier velocipedes: cast iron frames, solid rubber tires, and plain bearings for pedals, steering, and wheels. They were often quite durable and required little service. For example, when cyclist Thomas Stevens rode around the world in the 1880s, he reported only one significant mechanical problem in over 20,000 kilometres (12,000 mi), caused when the local military confiscated his bicycle and damaged the front wheel.

End of an era[edit]

The well-known dangers of the penny-farthing[23] were, for the time of its prominence, outweighed by its strengths. While it was a difficult, dangerous machine, it was simpler, lighter, and faster than the safer velocipedes of the time. Two new developments changed this situation, and led to the rise of the safety bicycle. The first was the chain drive, originally used on tricycles, allowing a gear ratio to be chosen independent of the wheel size. The second was the pneumatic bicycle tire, allowing smaller wheels to provide a smooth ride.

The nephew of one of the men responsible for popularity of the penny-farthing was largely responsible for its demise. James Starley had built the Ariel (spirit of the air)[24] high-wheeler in 1870; but this was a time of innovation, and when chain drives were upgraded so that each link had a small roller, higher and higher speeds became possible without the large wheel. In 1885, Starley’s nephew John Kemp Starley took these new developments to launch the modern bicycle, the Rover safety bicycle, so-called because the rider, seated much lower and farther behind the front wheel contact point, was less prone to a header.[3][25]

In 1888, when John Dunlop re-invented the pneumatic tire for his son’s tricycle, the high wheel was made obsolete. The comfortable ride once found only on tall wheels could now be enjoyed on smaller chain-driven bicycles. By 1893, high-wheelers were no longer being produced.[2] Use lingered into the 1920s in track cycling until racing safety bicycles were adequately designed.

The penny-farthing is a direct-drive bicycle, meaning the cranks and pedals are fixed directly to the hub. Instead of using gears to multiply the revolutions of the pedals, the driven wheel is enlarged to be close to the rider’s inseam, to increase the maximum speed. This shifts the rider nearly on top of the wheel and makes it impossible for the rider to reach the ground while sitting on the seat.[3]

The frame is a single tube following the circumference of the front wheel, then diverting to a trailing wheel. A mounting peg is above the rear wheel. The front wheel is in a rigid fork with little if any trail. A spoon brake is usually fitted on the fork crown, operated by a lever from one of the handlebars. The bars are usually mustache shaped, dropping from the level of the headset. The saddle mounts on the frame less than 18 inches (46 cm) behind the headset.

One particular model, made by Pope Manufacturing Company in 1886, weighs 36 pounds (16 kg), has a 60-spoke 53-inch (130 cm) front wheel and a 20-spoke 18-inch (46 cm) rear wheel. It is fitted with solid rubber tires. The rims, frame, fork, and handlebars are made from hollow, steel tubing. The steel axles are mounted in adjustable ball bearings. The leather saddle is suspended by springs.[27]

A third model, also made by Pope Manufacturing Company, weighs 49 pounds (22 kg) and has forged steel forks. A brake lever on the right of a straight handlebar operates a spoon brake against the front wheel.[29]

All three have cranks that can be adjusted for length.

Mounting requires skill. The rider must first grasp the handlebar and place one foot on a peg above the back wheel. Then the rider scoots the bicycle forward to gain momentum and quickly jumps up onto the seat while continuing to steer the bicycle and maintain balance.
[30]

Although easy to ride slowly because of their high center of mass and the inverted pendulum effect,[31][32] penny-farthings are prone to accidents. To stop, the rider presses back on the pedals while applying a spoon-shaped brake pressing the tire. The center of mass being high and not far behind the front wheel means any sudden stop or collision with a pothole or other obstruction can send the rider over the handlebars.[33] On long downhills, some riders hooked their feet over the handlebars. This made for quick descents but left no chance of stopping.[3] A new type of handlebar was introduced, called Whatton bars, that looped behind the legs so that riders could still keep their feet on the pedals and also be able to leap forward feet-first off the machine.[34]

The first recorded hour record was set in 1876 when Frank Dodds of England pedalled 15.8 miles (25.4 km) in an hour on a high wheeler around the Cambridge University ground.[35][36]

In 1884, Thomas Stevens rode a Columbia penny-farthing from San Francisco to Boston[3]—the first cyclist to cross the United States. In 1885–86, he continued from London through Europe, the Middle East, China, and Japan, to become the first to ride around the world.

Tremendous feats of balance were reported, including negotiating a narrow bridge parapet and riding down the U.S. Capitol steps with the small wheel in front.[41] 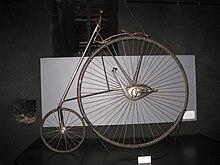 The bike, with the one wheel dominating, led to riders being referred to in America as “wheelmen”, a name that lived on for nearly a century in the League of American Wheelmen until renamed the League of American Bicyclists in 1994.[42] Clubs of racing cyclists wore uniforms of peaked caps, tight jackets and knee-length breeches, with leather shoes, the caps and jackets displaying the club’s colors. In 1967 collectors and restorers of penny-farthings (and other early bicycles) founded the Wheelmen,[43] a non-profit organization “dedicated to keeping alive the heritage of American cycling”.

The high-wheeler lives on in the gear inch units used by cyclists in English-speaking countries to describe gear ratios.[44] These are calculated by multiplying the wheel diameter in inches by the number of teeth on the front chain-wheel and dividing by the teeth on the rear sprocket. The result is the equivalent diameter of a penny-farthing wheel. A 60-inch gear, the largest practicable size for a high-wheeler, is nowadays a middle gear of a utility bicycle, while top gears on many exceed 100 inches. There was at least one 64-inch (1.6 m) Columbia made in the mid-1880s,[45] but 60 was the largest in regular production.