They bow as they walk their bikes onto the track and they do so again as they slot them into the start gates.

They have no coach, no mechanic, no team. They have assembled their bikes single-handedly. Some say a prayer, others throw salt over their chains as a blessing before the race begins.

Each of them is wearing a different brightly coloured jersey with matching helmet. They had not long ago arrived in suits, as tradition dictates.

Keirin racing is about respect, integrity and dedication. In Japan, it’s a serious business.

Fans of track cycling will know keirin as the event that has seen Sir Chris Hoy, Jason Kenny and Victoria Pendleton take their place on the top step of the Olympic podium.

Those who watch only when the Games roll around every four years may remember it as the race in which riders are led out by a motorised pacer.

Yet in Japan, it’s a £10bn industry, potentially lucrative for riders and fans alike as one of only four sports you can legally bet on. Its annual showpiece attracts more in wagers than is gambled over the entire British horse racing season.

Keirin isn’t just a sport in Japan. It goes deeper than that.

Hoy is walking around a school in Izu, some 200km and a two-hour bullet train journey from Tokyo. It’s an idyllic setting, situated atop a mountain with Mt. Fuji an imposing presence in the distance.

The last time he was here was in 2005 – three years before he won the first of his two Olympic keirin gold medals. Looking around his old room, he uncovers a sticker with his name on, which he had hidden safely behind a ceiling panel 15 years ago.

“Nothing has changed,” he says.

This is no ordinary school. This is keirin school, where just 10% of applicants are accepted. Only the very best get to come here.

“It’s a place of tradition which focuses on respect, self-control, and honesty, along with the knowledge necessary to be a professional keirin rider,” Hoy adds.

Keirin school is part military academy, part training camp. The day starts at 6:30am with roll call and finishes at 10pm with lights out, for six days a week, 11 months of the year.

In between, students have structured training and education sessions. Training could be on the bike, on foot or in the gym, while education sessions are both academic – studying tactics, theory and race rules in the classroom – and practical. Students also learn about bike mechanics in the workshop.

Throw in meal times – students consume more than 1,000 calories at breakfast and 4,500 at dinner – cleaning responsibilities and extra exercise and there’s very little time for anything else.

Everyone wears the same uniform. There are televisions, but no mobile phones, no email access and certainly no social media. Students may call home once a week on a payphone.

“It reflects Japanese culture,” says Hoy. “Everyone takes their job very seriously, they do it to the best of their ability and they do it the way they are told to do it.”

Every year, a small number of international cyclists are handpicked and invited to race the keirin season in Japan. They’re known as the ‘gaijin’ – foreigners.

Only a handful of British riders have been among their number. The latest is Joe Truman, a 23-year-old World, European and Commonwealth team sprint silver medallist.

“I’ve been a bit obsessed with Japanese keirin since I started track sprinting when I was about 15,” says Truman, who has competed in the past two keirin seasons in Japan.

“I’ve been obsessed with Japanese culture and I’ve always had a bit of an affinity with the country. When the ticket came for me to get the opportunity to come here, I grasped it immediately.

“It was a little bit of a shock to start with, I came straight from the Commonwealth Games, from Brisbane straight to here.

“I went from a big team environment to a small apartment in Izu on my own. It was a sudden change, but you’ve got to embrace it.”

Keirin school is a slightly different experience for international riders, though. They typically attend for only part of the year. Yet they must still comply with the exacting rules and powerful traditions that surround the sport.

And nothing can prepare you for your first taste of race day.

Established in 1948, keirin was created to boost income in Japan after the Second World War.

More than 70 years on, there are 43 velodromes in the country and fans can watch keirin racing on 365 days of the year.

“In betting offices, cafes and bars, there are thousands of people watching each race,” says Hoy.

“Every year, they have one big event, the Grand Prix, and on that single day, there is more money bet than on the entire British horse racing season.”

Top riders can earn more than £1m a year in prize money, with many continuing to compete into their 50s and 60s. Such is the scale of betting on racing that riders must abide by incredibly strict regulations.

Riders must arrive at meets dressed smartly – and everyone must then surrender their mobile phone. No communication with the outside world is allowed over the entire event. Many take place over four days.

Sometimes riders will race only once in those days. It will mark their only chance to see daylight, to get some fresh air. For the rest of the meeting, they are cooped up inside, hidden from the rest of the world.

It’s on the first day that riders declare their tactics. Before every race, riders know their opponents’ exact plans in advance – who is planning to attack when, and who has got a target on their back.

It makes for an intense experience, particularly when, for the entire duration of the race meeting, they only have each other for company.

Their bikes will already be at the track, having been shipped directly from their previous race, and riders must put it back together themselves. It arrives in the box they had packed it tightly into, unassembled with shoes and other bits of kit thrown in.

“Unlike internationally, the onus is all on us to do this,” Truman explains. “You get to know a bit more mechanically. Before, I didn’t know how to remove a crank.”

The first day of a race meeting is senken day – inspection day. Everything is painstakingly checked, from each part of the bike to a rider’s helmet and shoes.

“The bikes are all built to a very strict specification,” adds Hoy. “You look at the bikes and think it’s just a steel bike from back in the 1980s.

“Nothing has changed, they have made sure that the wheels, the tyres, the gearing system, everything is exactly the same for everybody.”

Tension builds as the races approach. Some riders throw salt over their bike as a blessing, others meditate, and with the clock ticking closer to race time, they are called into a holding room.

It’s a small room containing brown leather chairs and little else, resembling a doctor’s waiting room of years gone by. It’s an intimidating atmosphere, even more so when you don’t speak the language.

“Sometimes the other guys will just sit there and stare at you, give you a glare or talk at you in Japanese, some are shouting,” remembers Hoy.

Truman adds: “I was in a final and a guy had two bottles of smelling salts up his nose and wearing a bandana, he was staring right at me, looking at me dead in the eye.

“It psyched me out a little bit, and he did give me a big bump in the race, too.”

The races themselves can be rough. Crashes are frequent, with riders allowed to make contact with their opponents, unlike in international keirin.

During races, riders cannot look to the crowd or celebrate a victory as they cross the finish line, for fear they could be passing on a signal to gamblers. For the same reason, windows in rider areas in stadia are translucent to prevent contact with the outside world.

But if races and their build-ups are intense, afterwards it’s anything but.

Winners are expected to hand out water to their opponents as a way of expressing thanks for a good race, while riders frequently hand out presents to one another.

“Respect is such a big part,” says Truman.

“I’ve got a box full of presents, four or five pairs of gloves, tyres…

“It’s a really nice culture, and to be a part of that and absorb it myself as a foreigner coming in is really nice, and I think it’s made me improve as a person as well.”

The keirin school in Izu stands in the shadow of Japan’s Olympic velodrome, a venue that must now wait another year until it welcomes the world’s finest track cyclists.

The version of keirin fans will watch at the Tokyo Games will be a far cry from that which is taught just a stone’s throw away.

Riders will be on carbon-fibre bikes, wearing aero-dynamically perfected kit, surrounded by coaches, performance analysts and all of their expertise and advice.

The keirin might still seem like just a simple – perhaps a little eccentric – bike race. But its origins and traditions in Japan tell a richer story about our Olympic hosts.

Wed Apr 29 , 2020
The Juiced Scorpion has been one of the most highly anticipated electric moped-style bikes of the season. And while the standard Juiced Scorpion has already begun making deliveries, the higher-powered HyperScorpion has eluded pre-order holders for now. Like many US-based electric bicycle companies that produce their e-bikes in China, Juiced […] 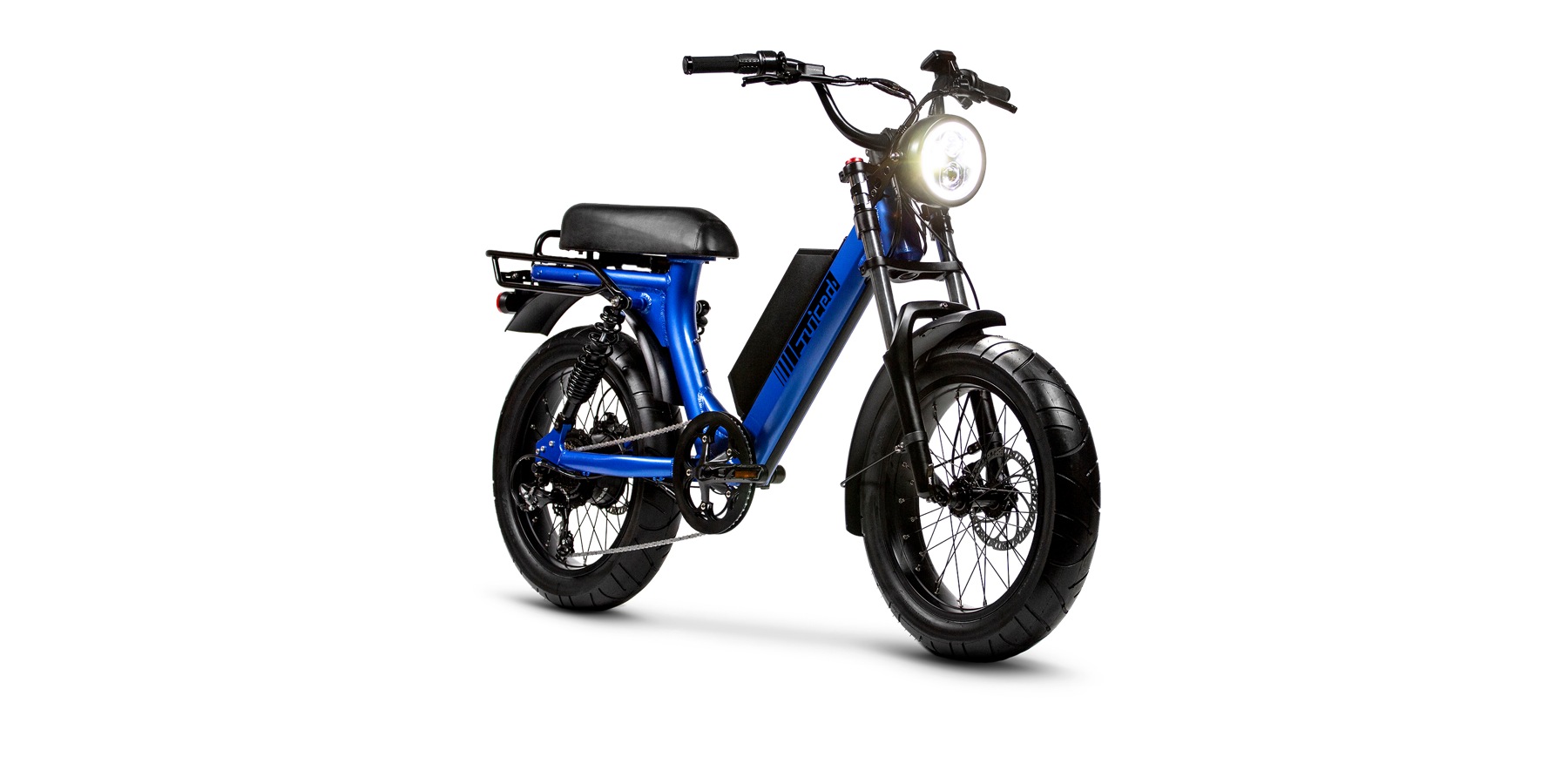