In Chama, New Mexico, at least 50 campers had to evacuate because of snow damage at the Rio Chama RV Park.


Dennis Friesen’s annual camping trip took a drastic turn because of it.

“This was just a great magnitude event,” said Friesen. “It definitely was quite a sight to see with all the tree limbs laying in the roads at the RV park.”

The heavy snow in Chama caused tree limbs to fall down, which damaged camper trailers and benches at the park. The heavy snow also brought down power lines, which prompted officials to evacuate the entire park.

“It was just chaotic all night, and then 20 minutes later some campers called and said that they got trapped in their camper,” said Jonah Samora, a volunteer firefighter at the Chama Fire Station. “It was horrible, crazy, chaotic.”

Samora said because the campgrounds were unsafe, they had to move the campers to the First Baptist Church and local hotels.

“The volunteer police, EMS, highway department, we all come together as one big family to help the community to make sure everyone is safe,” Samora said.

But Herbert Kneisley, a camper visiting from Texas, was unaware of those evacuation centers, so he ended up sleeping in his car.

Kneisley already paid for the site for two weeks, but said he’s figuring out what to do next.

“They don’t give refunds here, so it’s suppose to start warming up tomorrow I think,” said Kneisley. “We’ll see what happens… might have to go somewhere else tonight.”

Rex Fockler, the manager at the RV site, said they’re working on getting the power restored and the tree limbs cleared before the weekend.

“We had one camper that was severely damaged, I think it was destroyed,” said Fockler. “We have a lot of reservations on Saturday. We’re hoping to get everything cleaned up so we can get those folks back in here on Saturday so they can enjoy camping.”

The Red Cross and several other agencies are helping them with cleanup and restoring the power.

Sun Sep 13 , 2020
Technavio has been monitoring the global automotive communication protocols market size and it is poised to grow by USD 574.57 million during 2020-2024, progressing at a CAGR of almost 9% during the forecast period. The report offers an up-to-date analysis regarding the current market scenario, latest trends and drivers, and […] 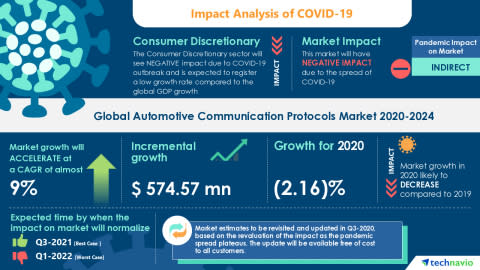