Trek Bicycle Corporation is a bicycle and cycling product manufacturer and distributor under brand names Trek, Electra Bicycle Company, Bontrager, and Diamant Bikes. The company has previously manufactured bikes under the Gary Fisher, LeMond Racing Cycles, Klein, and Villiger Bikes brand names. With its headquarters in Waterloo, Wisconsin, Trek bicycles are marketed through 1,700 independently owned bicycle shops across North America, subsidiaries in Europe, Asia, South Africa, as well as distributors in 90 countries worldwide. Most Trek bicycles are manufactured outside the United States, in countries including the Netherlands, Germany, Taiwan and China.[2]

In December, 1975, Richard (Dick) Burke and Bevil Hogg established Trek Bicycle as a wholly owned subsidiary of Roth Corporation, a Milwaukee-based appliance distributor. In early 1976, with a payroll of five, Trek started manufacturing steel touring frames in Waterloo, Wisconsin, taking aim at the mid to high-end market dominated by Japanese and Italian made models. Trek built nearly 900 custom hand-brazed framesets that first year, each selling for just under $200. Later that same year Trek Bicycle was incorporated. In 1977, Penn Cycle in Richfield, Minnesota became the first Trek retailer in the world. Within three years, Trek sales approached $2,000,000.

Hampered without additional manufacturing capacity, Trek sales plateaued in the late 1970s. In just a few years Trek had outgrown its original “red barn” manufacturing facility—a former carpet warehouse. Recognizing the need for expansion, in 1980 Trek broke ground on a new 26,000 sq ft (2,400 m2) corporate headquarters on the outskirts of Waterloo. Company co-founder Dick Burke would later recall that “it wasn’t until we built the new factory that we became a business.” With more factory space available, Trek expanded its manufacturing to include complete bikes. In 1981 Trek entered the steel road racing bike market, introducing the “Pro” line, including the 750 and 950 models, and in 1983 Trek built its first mountain bike, the 850. In 1984 Trek ventured into the aftermarket parts and accessories business, launching its Trek Components Group (TCG) department.

In 1985, borrowing technology from the aerospace industry, (and bike companies such as Alan and Vitus), Trek introduced its first bonded aluminum bike frame, the 2000. The introduction of bonded aluminum to Trek’s production line proved very problematic for a company that had built itself on hand-brazed steel frames. Manufacturing ground to a halt as Trek worked to figure out how to build bonded frames in a production environment. A year later Trek followed up the success of the 2000 with a 3-tube carbon composite model, the 2500. Thus began Trek’s foray into carbon fiber. That same year, to keep up with rapidly growing sales, Trek added another 75,000 sq ft (7,000 m2) of manufacturing space to its Waterloo headquarters. In 1988 Trek introduced “Trek Wear,” marking the company’s entry into the cycling apparel business. A year later Trek expanded into foreign markets, opening subsidiary offices in the UK and in Germany. That same year Trek introduced its Jazz brand of bicycles, a collection of entry-level and kids’ bikes designed by Trek but manufactured in Taiwan. Jazz bicycles were discontinued in 1993.

1989 was a pivotal year for Trek, marking the year that the company unveiled its first molded carbon fiber frame, the Trek 5000. The 5000 frameset (monocoque carbon frame plus bonded aluminum fork) had an advertised weight of 3.3 lb (1.5 kg). Designed by Trek but built by Brent Trimble, an outside manufacturer, the 5000 suffered enough quality problems that it was discontinued after just one year. But the lessons learned from the 5000 would prove to be instrumental in driving Trek to develop its own carbon manufacturing capabilities in the coming years.

In 1990, Trek developed a new category of bicycle that combined the comfort features of a mountain bike with the quick ride of a road bike: MultiTracks, Trek’s first line of hybrid bikes, were born. That same year Trek also introduced its first line of kids’ bikes. In 1991 Trek opened its first company-owned retail store in nearby Madison, Wisconsin. In addition to showcasing a full line of Trek products, the Trek Store served as a hands-on sales training center for employees from Trek’s headquarters who lacked retail experience. The store also provided an outlet for Trek to test merchandising and marketing ideas before expanding them to its network of independent bicycle retailers. 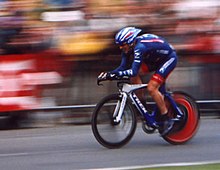 Lance Armstrong in the prologue of the Tour de France in July 2004 in Liege, Belgium 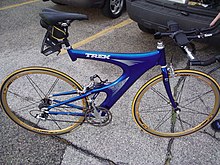 A carbon fiber Y-foil from the late 1990s

In 1997, Trek helped sign former world road race champion (1993) Lance Armstrong to the Trek-sponsored United States Postal Service Pro Cycling Team. Armstrong won his first Tour de France in 1999 aboard a Trek 5500, becoming the first American to win the Tour on an American team riding an American made bicycle. Armstrong went on to win a record-setting seven-consecutive Tours de France, all of them aboard Trek bicycles aside from a few early time trial stages that he rode aboard a Litespeed bike, painted and badged as a Trek. In 2012, all of Armstrong’s Tour victories were rescinded after Armstrong was found to have violated anti-doping regulations.[4]

In 1998, Trek established its Advanced Concepts Group (ACG), a collection of engineers and technicians dedicated to technologies development. The leading edge of Trek’s design and engineering efforts, ACG is perhaps best known for a number of products introduced and used by Lance Armstrong during his historic Tour de France wins, including the original Trek Madone (2003)—named for the Col de la Madone, a 12K climb that starts in the French town of Menton and used by Armstrong to test his fitness—and TTX time trial bike (2005). That same year Trek opened its first European manufacturing facility, a frame and wheel assembly plant in Carlow, Ireland. The Carlow facility stayed open until late 2004, at which time Trek transferred its European production to a manufacturing facility in Hartmannsdorf, Germany.

Responding to the unique needs of female cyclists, in 2000 Trek introduced Women’s Specific Design (WSD) bicycle and accessories. WSD products are designed to fit female riders, and feature sizing and proportions appropriate for women. In October 2001, Trek introduced a custom bike program named Project One, which gave customers the opportunity to customize their Trek bike by selecting the bike’s paint scheme and component mix.

Hoping to expand into a new market segment, Trek introduced Trek Travel in December 2002, a provider of luxury cycling vacations in Europe and North America. Trek Travel operated as a wholly owned subsidiary of Trek Bicycle until January 2007, when Trek spun off its interests in the company. Despite the split, Trek and Trek Travel enjoy a close working relationship.

In 2003, Trek acquired Villiger, a Swiss bicycle company, and Diamant, the oldest bicycle company in Germany. The acquisition gave Trek a foothold in the active-leisure bicycle market, an important segment in Europe. As part of the acquisition, Trek took over ownership of the Villiger-Diamant production facility in Hartmannsdorf, Germany. Trek’s global expansion continued in 2005, when Trek expanded into the Chinese market by opening two stores in Beijing and signing deals with 20 Chinese distributors.

For the third time in its history, in 2005 Trek again expanded its worldwide headquarters in Waterloo, adding another 43,000 sq ft (4,000 m2) to house its burgeoning engineering, R&D, and marketing departments. As part of the expansion, Trek included an atrium exhibit to display a number of historically significant bikes from Trek’s family of brands, including one of the first mountain bikes ever built by Gary Fisher, and seven bikes used by Lance during his historic Tour de France run (one from each year, 1999–2005). 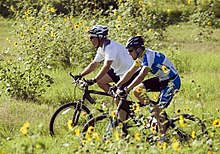 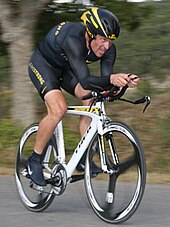 Lance Armstrong on November 11, 2008 at an informal time trial near New Braunfels, Texas

In 2008, after years of behind-the-scenes support for the League of American Bicyclists and the Bikes Belong Coalition (now PeopleForBikes), Trek announced its 1 World 2 Wheels bicycle advocacy campaign at its annual Trek World dealer convention in Madison, Wisconsin. Central to 1 World 2 Wheels is its “Go By Bike” initiative, which urges Americans to ride their bikes instead of drive their cars for trips of two miles (3 km) or less. Through 1 World 2 Wheels Trek also pledged $1,000,000 to help fund the League of American Bicyclists’ “Bicycle Friendly Community” program and committed $600,000 to the International Mountain Bicycling Association’s (IMBA) Trail Solutions Services. On January 6, 2014, Trek announced the acquisition of the Electra Bicycle Company.[5]

In 2017, Trek paid equal prize money to the male and female winners of the Cyclocross World Cup race hosted at their headquarters in Waterloo, Wisconsin, which was, “the first time in the history of the sport that women would be paid as much as men for racing the same course at the World Cup level.”[8] 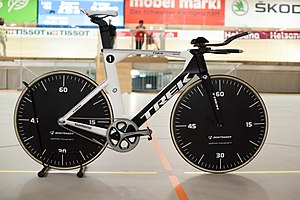 In 2014, the UCI unified the two classifications into a single classification in line with regulations for current track pursuit bikes. Following the change in the rules, German Jens Voigt became the first rider to attempt the hour record, on 18 September 2014 at the Velodrome Suisse, Grenchen, Switzerland on a Trek bicycle.[9][10] He set a new record of 51.110 km, beating the previous record set by Sosenka by 1.410 km.[11]

For the year 2010, Trek teamed with multiple suppliers to provide eco-friendly products. This includes brand new bikes that are economically priced and are made out of steel. Steel is an easier material to obtain and recycle. Also, Trek is starting to provide bike shops with funds to start recycling old tubes to be sent to Alchemy Goods in Seattle, Washington, to be made into bags, seat bags, and panniers.

The relationship between Trek and Tour-de-France winner Greg LeMond went back to at least 1995 when LeMond licensed Trek to produce LeMond branded bicycles. According to Trek, “In 1999, the LeMond line was one of the fastest growing road bike brands and one of the top five largest road bike brands in the United States”.[12]

In March 2008, LeMond Cycling Inc prepared a suit against Trek, accusing it of bowing to pressure from “third parties” to “wind down” his brand through lack of distribution and promotion, especially in the European market. The complaint also says that “Since 2001, Trek has systematically sought to silence Mr. LeMond’s right to make comments that constitute an informed and honest opinion on matters of legitimate public interest – the problems associated with the use of performance enhancing substances”. The complaint includes examples of Trek threatening its ties with LeMond in 2001 and 2004 after he made public statements against doping, Michele Ferrari, and Lance Armstrong[13][14]

Trek responded in April 2008 by suing to sever business ties with LeMond.[12][14] Trek’s press release said that “LeMond’s suit was characterized by Burke as containing false and irresponsible allegations”. Burke also said “for years, Greg LeMond has done and said things that have damaged the LeMond brand and the Trek brand as a whole”. . . . “His actions are inconsistent with our values—values we believe in and live everyday. And after years of trying to make it work, we are done.” [12][12] The suit was settled out of court in 2010.[15]